Is There Alcohol In Magic Kingdom?

Vacationing at Walt Disney World has something for everyone in the family. In most Disney World theme parks, it’s easy to find beer, wine, and cocktails for sale. Whether you want a drink from Oga’s Cantina in Galaxy’s Edge at Disney’s Hollywood Studios or a quick drink from the Dawa Bar in Animal Kingdom, you’ll be able to find an alcoholic drink. But the Magic Kingdom has always made it a bit more difficult. Only table-service restaurants serve alcohol in Magic Kingdom.

However, they only serve beer, wine, and sparkling wine. This can be perfect if you plan a trip with your family to Magic Kingdom. Along with a broad selection of beer and wine, there are many fun activities for adults and kids in the park. You should enjoy knowing that alcohol is available in other parts of Disney world parks. Want to know where you can get the best beer in Magic Kingdom? Take a look at my recommendations below! 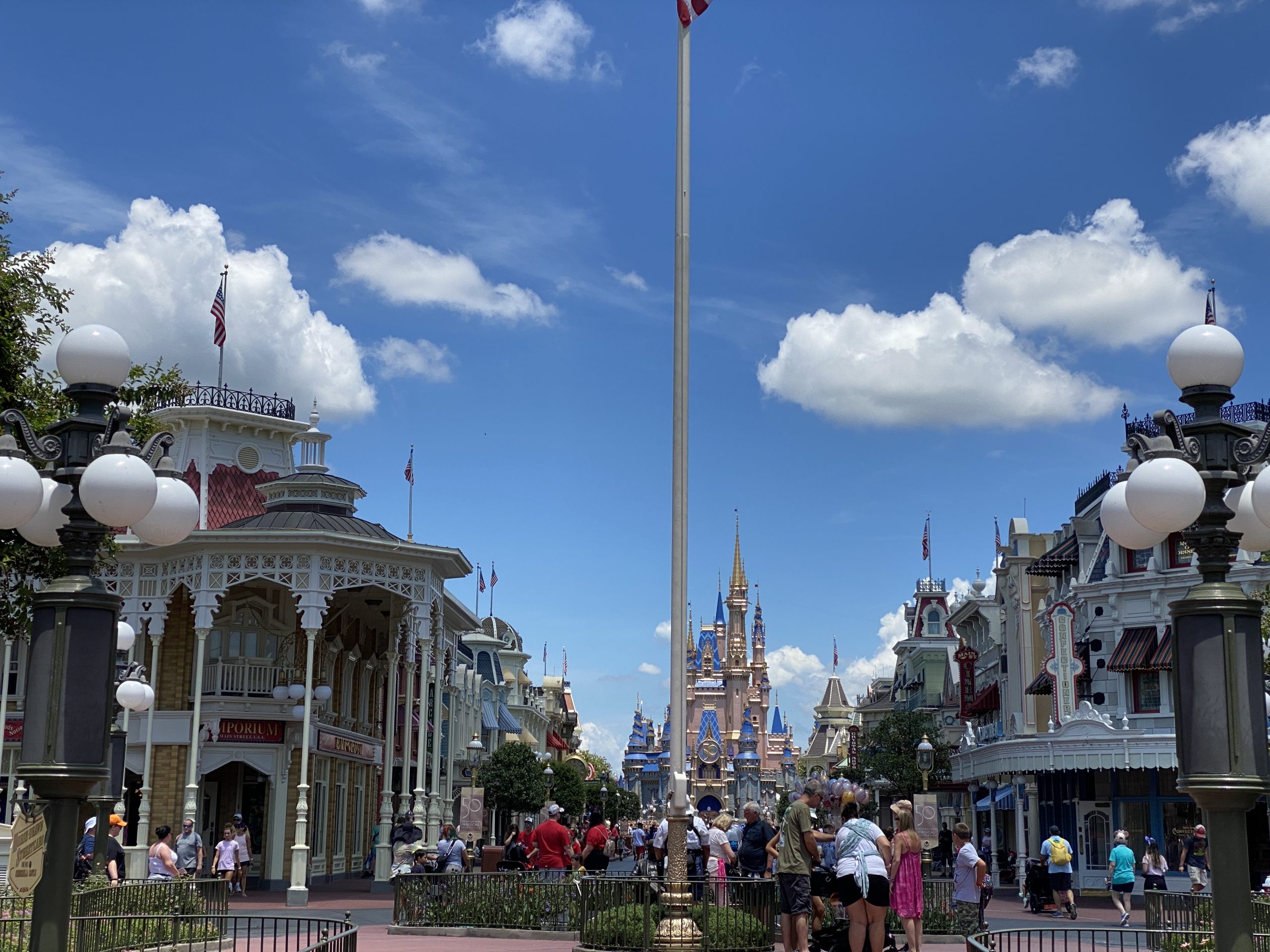 Is there any hard liquor in Magic Kingdom?

In Magic Kingdom currently, there is no hard liquor available. However, most of the restaurants have a wide range of choices, including Italian beers, like Peroni and French Champagne! All tastes are welcome, but you can check the food in every restaurant before booking.

Where can you buy alcohol in Magic Kingdom?

Beer and wine in Magic kingdom are available at eight table-service restaurants. You won’t be able to find beer and wine at the kiosk snack stands, so I highly recommend exploring at least two of the eight restaurants that provide adult drinks. We’ll explain where you can buy alcohol in Magic Kingdom, the drinks served, and when alcohol was officially allowed to be served.

You may wonder where to buy an adult beverage in the original Disney World park. Beer and wine will be served at

And as always, alcohol is more expensive to buy in theme parks. However, unlike other parks, there is room for you at one of the 8 Magic Kingdom restaurants that serve alcohol. 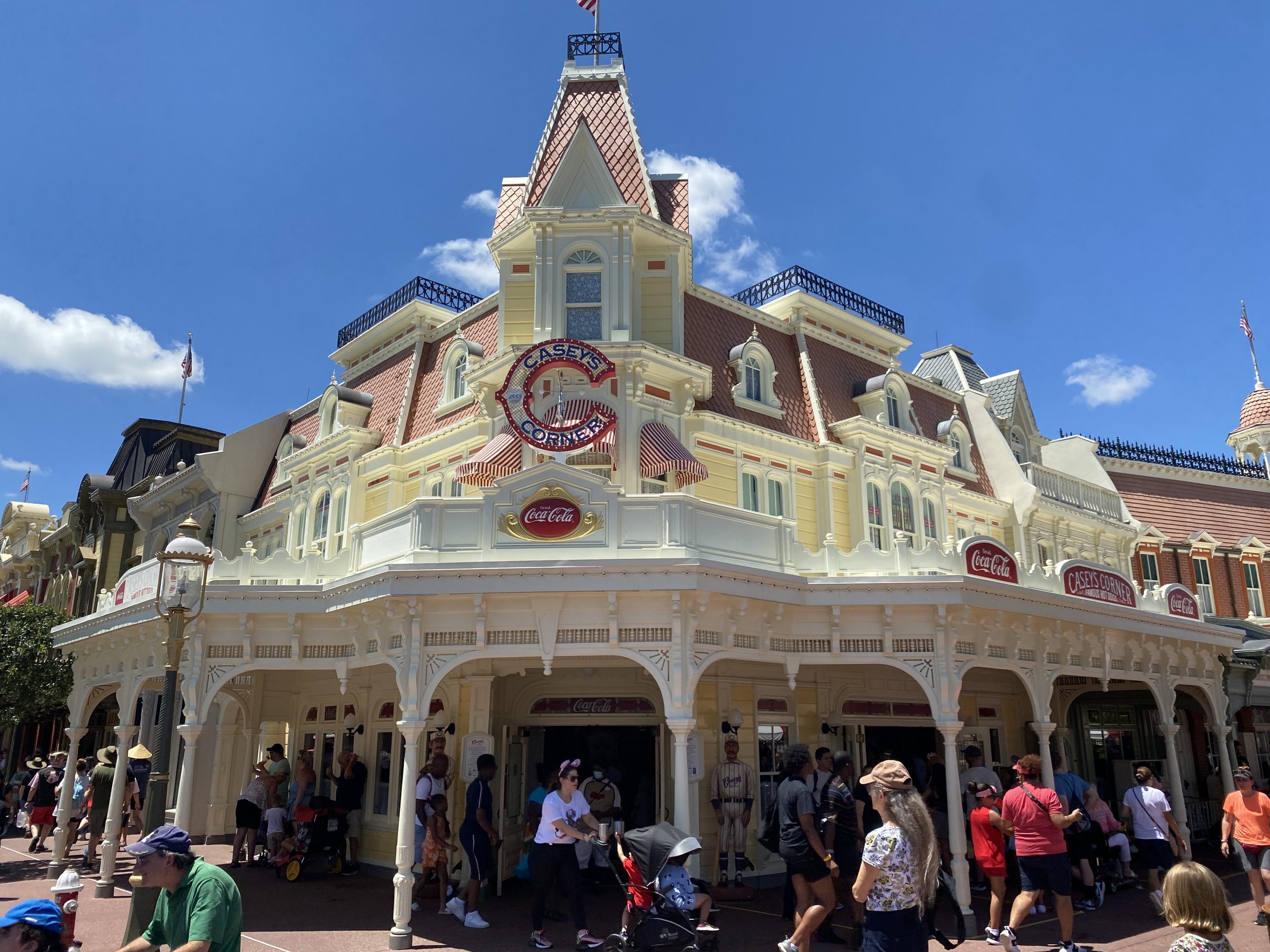 Where is the best type of food and cocktails in Magic Kingdom?

As for adult Beverages at Tony’s Town Square Restaurant, wine is the main attraction. As an Italian place, it would be the best place to get wine at Magic Kingdom. But no, you can find that at Cinderella’s Royal Table. You can order a Wine Cocktail here at Tony’s, but I’ve never tried it. I usually steer them toward Skipper Canteen or The Crystal Palace. The Plaza Restaurant between Tomorrowland and Main Street, U.S.A., at Magic Kingdom park, serves salads, sandwiches, burgers, and ice cream fountain treats with a great menu of beer & wine. Be Our Guest serves up plenty of beer, cider, wine, and champagne, including private-label wine and champagne! Be Our Guest Restaurant was the first restaurant that allowed alcohol to be served at the park when it opened in 2012.

Why is there no hard liquor in Magic Kingdom?

It was only sometimes possible to purchase alcohol in Magic Kingdom. If Walt Disney had it his way, the parks would never have sold it. Only recently, you could find alcohol in the Magic Kingdom. The Disney viewpoint was influenced by Walt Disney personally. When the park opened in 1971, there was a strict no-alcohol policy to create a family-friendly experience.

Walt Disney was opposed to drinking in Magic Kingdom, which was the only Disney park in Florida at the time. But time (and company priorities) change. Disney World has relaxed its view on alcoholic beverages in the Disney Kingdom, and the park now offers cold beer and wine in its theme park at a table service restaurant. 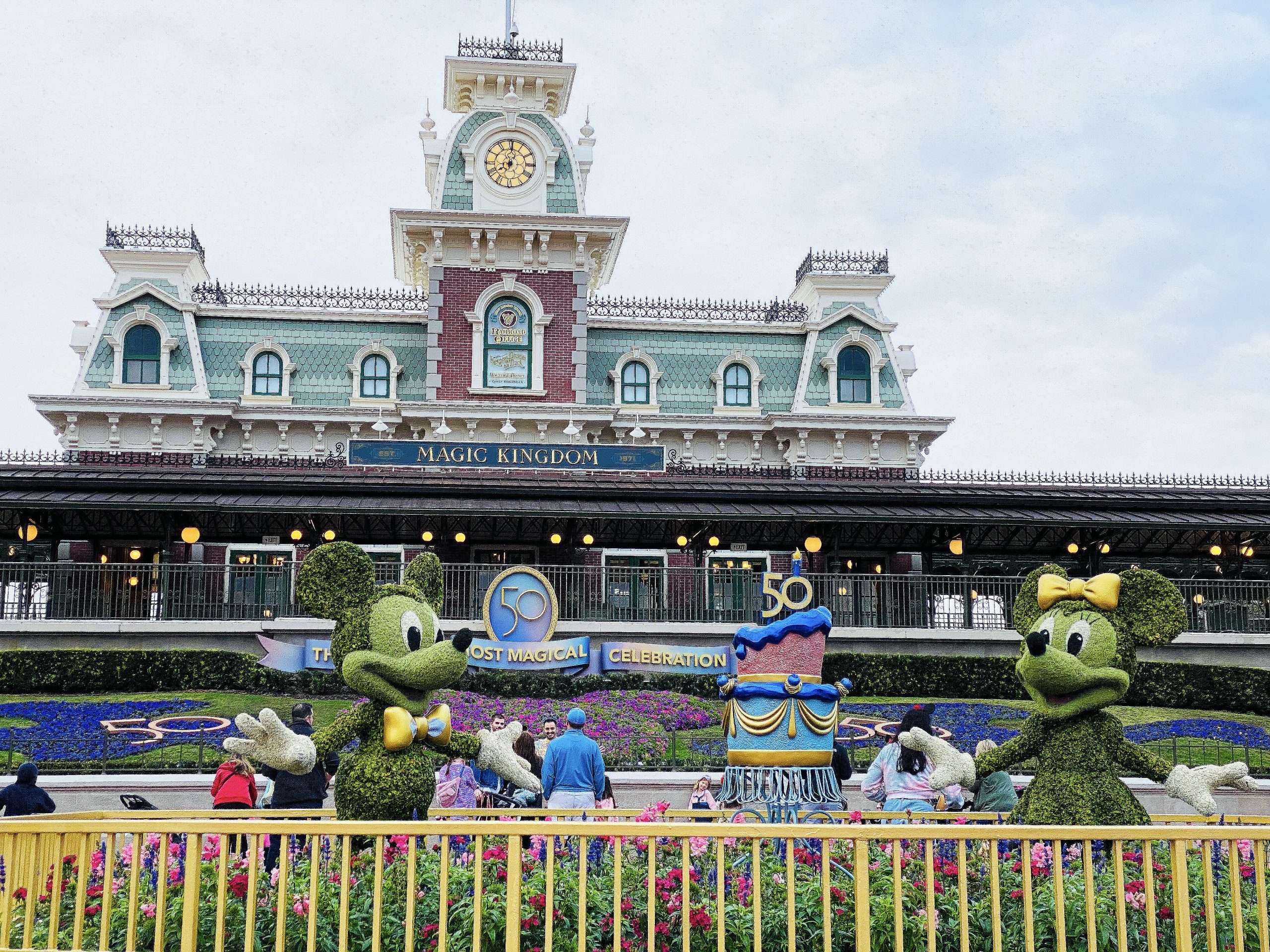 Can you bring alcohol into Magic Kingdom?

No, you cannot bring your alcoholic beverages into the park. Unlike food and snacks, Disney does not allow guests to bring alcohol into any of the four theme parks. If you’re caught with an adult beverage at security, it will be confiscated, and you won’t be allowed to pick it up on your way out of the park. It’s best to leave anything you bought before arriving.

Magic Kingdom offers many good liquor alternatives, but if you are looking for a shot of tequila, then you will have to travel outside the Magic Kingdom. The park has an incredibly easy route with Monorails, allowing easy travel to 3 Disney hotels stocked with restaurants and cocktail bars.

Some restaurants and lounges may require ADRs, while others are rapid service or offer first-come, first-served. EPCOT has access to Magic Kingdom via Monorail, and the Monorail allows you to drink outside of Magic Kingdom.

All of the Magic Kingdom Area Resorts located around 7 Seas Lagoon can be reached by car, so there are a lot of alcohol-serving places close to the park. Walking to the Contemporary Resort, the Grand Floridian, or taking the Monorail is possible. Each resort has many bars where you can enjoy a drink while escaping Magic Kingdom. This is ideal when you want to have an alcoholic drink after a long day in Magic Kingdom with the kids. 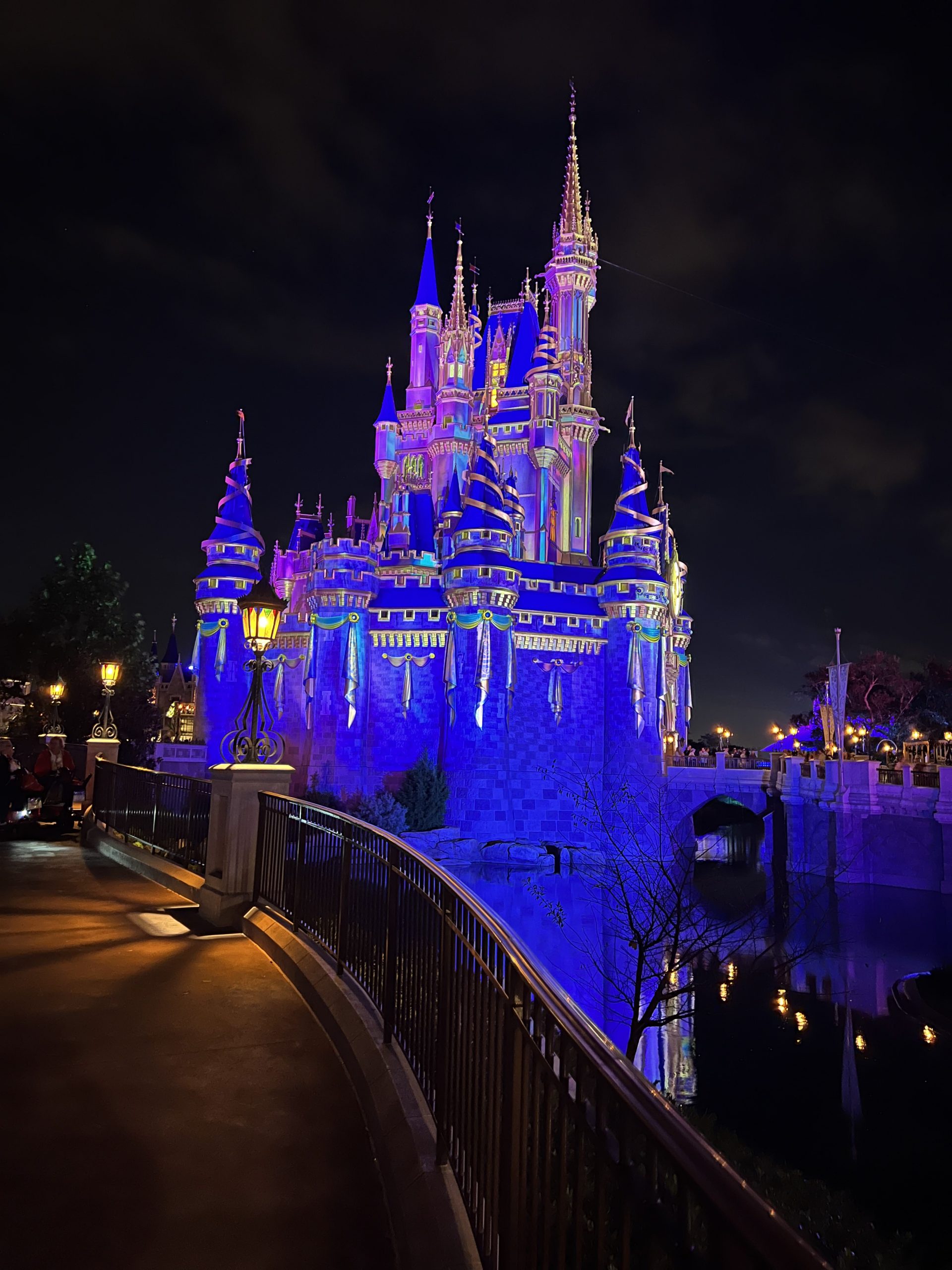 Do I need a reservation?

You will likely need a reservation for one of the restaurants in Magic Kingdom. With a little planning, it’s easy to enjoy some of the adult beverages offered on the property. Suppose you didn’t plan; no worries. Check out our tips for how to get last-minute Disney dining. You can sometimes find same-day reservations. Just be sure to search by both meal time (e.g., “Dinner”) and by each actual hour (e.g., “5:00 PM”) because sometimes results will vary. Second, the Disney World app now displays wait times for tables at most table-service restaurants.

You can also join the walk-up list via the app, and when a table is available, you’ll be notified. Third, even if the above two methods in the app fail you, you can walk to the restaurant and ask if they have anything available. The restaurants sometimes can accept walk-ups. There are alternatives to leaving the park, as mentioned above, but I recommend that you make reservations for a table and enjoy a meal in the restaurant away from the park crowd.

Types of beer and wine in Magic Kingdom

What types of beer and wine are available in this park? One of my favorites is Skippers Canteen which serves up two specialty cocktails: Skipper Sangria and Veranda Shandy. In addition, you can browse a short beer list. The alcohol options are much more extensive at Be Our Guest—and much more expensive.

Cinderella’s Royal Table offers specialty cocktails such as mimosa, sangria, and Bellinis for breakfast. They offer Cinderella-themed flights of champagne, sparking wine, cocktails, and red/white wine during lunch and dinner. They have an immaculate and extensive wine list that includes options from France, Italy, Germany, and California, along with pricer reserve wines by the bottle. All beer options are imported from France, Belgium, and Canada. One thing to note is that serving alcohol solely in table-service spots is by design, and this helps keep the rowdiness down.

Where can I buy cheap beer in Magic Kingdom?

There are lots of places to get drinks in Magic Kingdom, but we can help you find some good deals by offering you a $79 bottle of champagne on Be Our Guest. The best draft beer in Magic Kingdom is only $8 – $13. Options range from draft to bottle, but my favorite is the Big Wave Golden Ale. The flavors vary in notes, but they have a special type for every beer drinker.

Can you bring alcohol into Magic Kingdom?

While guests can bring many beverages, such as water, to Magic Kingdom and other Disney World theme parks, they cannot bring any alcoholic beverages. None would consider the possibility. There are few chances that if you drink in Magic City, you will get past security. It’s against the rule, and there is no alcohol-allowed policy. This option isn’t logical, and you’ll get in trouble and possibly be banned from the site.

There are also no bars in the park. However, there are alcohol bars and kiosks at Animal Kingdom and Hollywood Studios. This Disney Park is Disney’s most imaginative and children-oriented park. Many people have been arguing that this place is the Magic of earth, and a good supply of cheap alcohol is likely to spoil the atmosphere of the Magic Kingdom.

What other adult Disney park options are there?

Enjoying a Drink at Disney World As you can see, while several locations serve alcohol in Magic Kingdom, the options are limited. Epcot will be a better park if variety and quantity are your goals. It’s the best Disney World park for adults! Although the Magic Kingdom may not be the easiest park to grab a drink, the Magic there makes the day intoxicating! This Disney park, to be fair, is the most whimsical and child/family-orientated Disney World Park.