Voodoo Donuts Orlando: Are They Located In Disney World?

To add to the many unique things you’ll find at CityWalk Orlando, it is also the home of Voodoo Doughnut’s Orlando location. Therefore, Walt Disney World is not a current location. In this article, you’ll find everything you need to know about Voodoo Donuts, Orlando.

The Voodoo Doughnut location at Universal Orlando opened on May 2, 2018. This unique doughnut shop is widely known for its strange doughnut creations and equally strange business offerings. From Voodoo Doll doughnuts to legal weddings, you never know what you may experience at Voodoo Doughnut, Orlando. 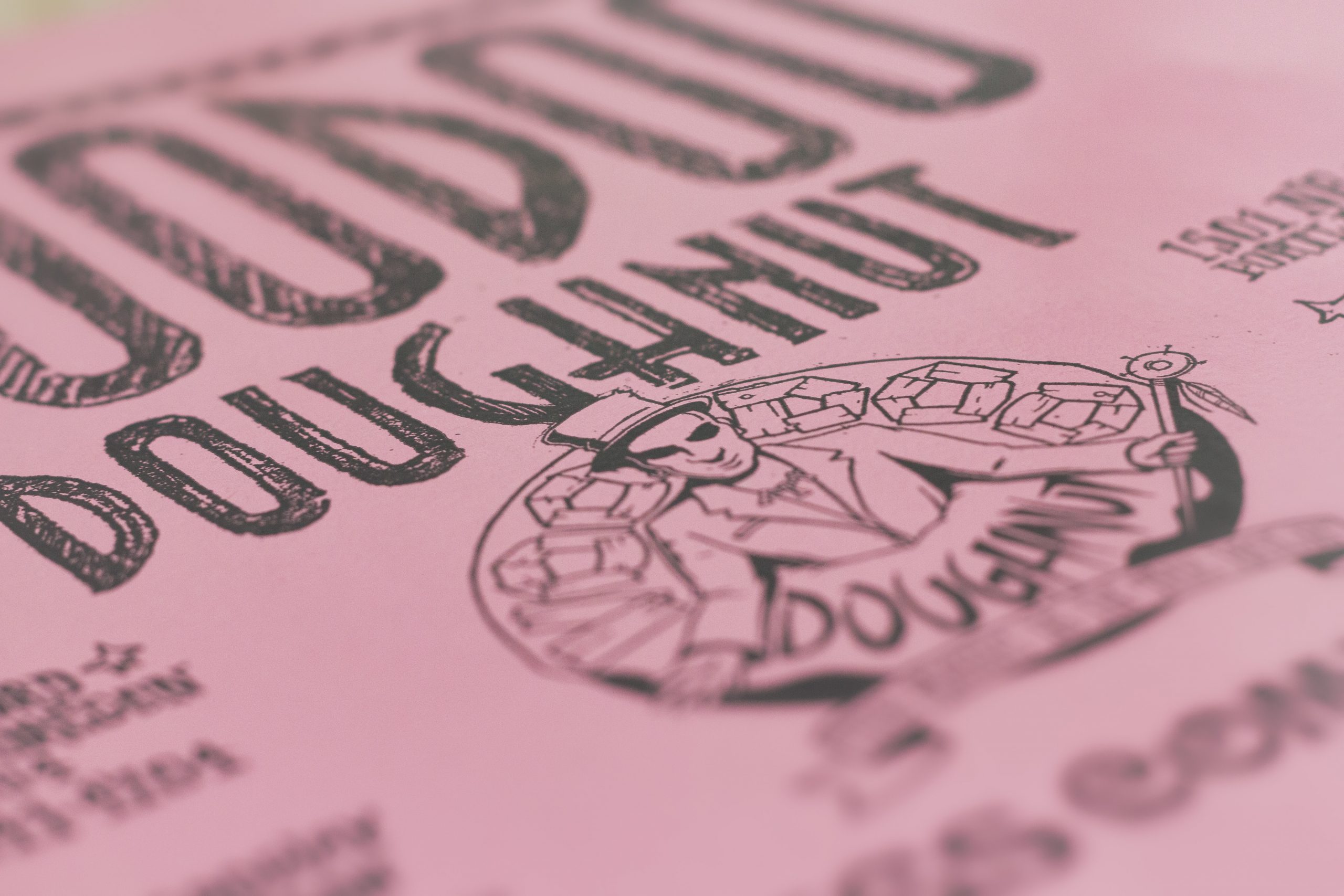 ALSO READ: WHAT IS THE FASTEST RIDE AT DISNEY WORLD 2022?

After discovering that their hometown had no doughnut shops, Kenneth “Cat Daddy” Pogson and Tres Shannon decided to open the first Voodoo Doughnut location.

Back then, they joked about “world doughnut domination.” Today, however, it seems that it could be a reasonable goal

What is so Special About Voodoo Donuts?

A trip to Voodoo Doughnut is guaranteed to be a memorable experience.

You can try a combination of traditional and unconventional doughnut combinations. Additionally, you can custom-order your doughnuts to suit any special occasion, including birthdays.

There are also several other unique things to experience at Voodoo Doughnut in Orlando. For example, outside the store, you can take a photo sitting on the giant doughnut throne.

Once inside, notice the mural above the kitchen area. It’s made entirely of duct tape to incorporate a piece of the original store. If you pay attention to detail, you’ll also see connections to the original store, like the zip code on the wall.

You can also watch the magic in action at the decorating counter, where you can watch the staff decorate the next round of doughnuts.

Where is the Original Voodoo Doughnut Location? 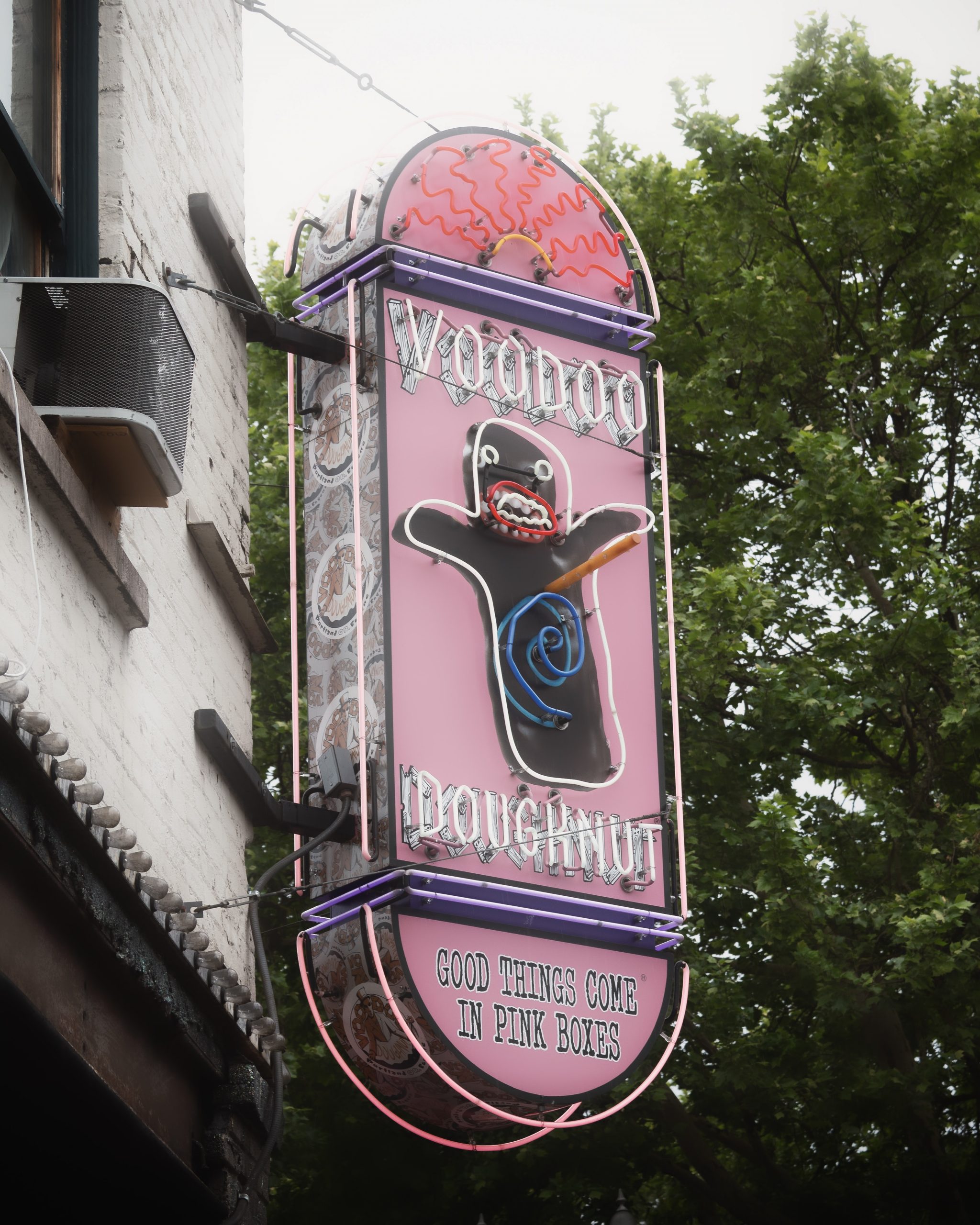 The original Voodoo Doughnut is located in Old Town, the original Chinatown, in Portland, Oregon. The store made national headlines within a month of its grand opening in 2003.

Since then, the operation has expanded to several locations throughout the United States. One of their newest locations is the Orlando location.

How Many Voodoo Doughnuts Are There?

There are currently 16 Voodoo Doughnut locations throughout six states, including Washington, Colorado, Florida, and Texas.

As Voodoo Doughnuts are becoming more and more popular, it wouldn’t be surprising to see many more locations pop up soon. In fact, there are several that are expected to open soon.

The following locations have a Voodoo Doughnut coming soon:

What Doughnuts Should I Get?

The number of choices may be a little overwhelming if you’ve never tried Voodoo Doughnuts. The store offers over 50 different types of doughnuts.

Additionally, these doughnuts are very popular, so your favorites may not always be available when you place your order.

This doughnut honors an old member of the Wu-Tang Clan known as Dirt McGirt.

This unique option is a raised yeast doughnut bar with maple frosting topped with bacon.

The Mango Tango doughnut is a raised yeast shell filled with mango jelly. It comes topped with vanilla frosting and Tang.

The Portland Cream Doughnut is a raised yeast shell filled with Bavarian cream.

It comes topped with two eyeballs that represent the vision of Portland.

This is the doughnut to try if you want the full voodoo experience, as it comes decorated with a vanilla frosting pentagram.

You can also get a pumpkin cake doughnut with vanilla frosting if you dislike cream cheese.

The Voodoo Doll doughnut is a raised yeast doughnut in the shape of a voodoo doll. It’s filled with raspberry jelly and topped with chocolate frosting.

It even has a pretzel stake.

This raised yeast doughnut is filled with Bavarian cream and topped with citrus frosting and chocolate chips.

Grape Apes is a raised yeast doughnut with vanilla frosting and grape dust. It comes topped with purple sprinkles.

The apple fritter is an amazing fried doughnut with apple chunks and cinnamon topped with a delicious glaze.

If you’re not feeling the darker-themed doughnuts, you can try The Little Pink.

This is a doughnut with raised rings, strawberry-flavored icing, and round sprinkles.

You’ll also love the Memphis Mafia, which is a tribute to Elvis Presley.

The Memphis Mafia is a fried doughnut with banana chunks and cinnamon. Its toppings include glaze, chocolate drizzle, peanut butter, peanuts, and chocolate chips.

Cinnamon Sugar Cake doughnuts are another simple option. This doughnut is a plain cake doughnut topped with cinnamon sugar.

What is Voodoo Donut’s Most Popular Donut?

The Voodoo Doll doughnut is the most popular Voodoo Doughnut. This doughnut was created long before the opening of the first store.

The Portland Cream, Bacon Maple Bar, and Oh Captain, My Captain are also some of the most popular doughnuts at Voodoo Doughnut.

Voodoo Doughnut sits at the heart of CityWalk Orlando at Univeral Orlando Resort.

This location opens at 7:00 each morning and closes at midnight.

This means you can grab one of these strange- but incredible- treats for breakfast or a late-night snack.

If you visit Voodoo Doughnut, the crowd it draws speaks volumes for the quality of the doughnuts on their own. While there is usually a lengthy line, you can generally make your way through it pretty quickly.

If you don’t have the time to wait in line, you can order online using the official Universal Orlando app.

When your doughnuts are ready, you can pick them up from the Kiosk outside the store. Unfortunately, the Orlando location does not currently offer delivery. How Much are a Dozen Voodoo Doughnuts?

Depending on your chosen options, a dozen Voodoo Doughnuts will cost between $19.95 and $31.95.

The classic dozen features a combination of traditional and some unique flavors but doesn’t include any extreme concoctions.

This pack usually includes options similar to those in the list below:

The doughnuts in this pack of a dozen Voodoo Doughnuts range from classic and somewhat crazy. It is perfect to fit any taste and has a variety of adventurous flavors.

Some doughnuts you’ll usually find in the Voodoo Dozen include:

Voodoo’s best doughnut products are all in a pack. This box provides you with the ultimate VooDoo experience!

In this box, you’ll find a combination of the most extreme doughnut combinations you can find at Voodoo Doughnut.

You can also get a dozen Vegan doughnuts.

Can You Use a Universal Gift Card at Voodoo Doughnut?

It’s also important to note that Annual Pass holders can use their pass for a discount on their order.

In 2017, Fundamental Capital acquired a considerable stake in Voodoo Doughnuts. Chris Schultz, the former CEO of a fast-growing restaurant group, is now the company’s CEO.

Given his former success, while serving as the Senior Vice President of MOD Pizza, there’s no doubt that there is only growth and other exciting things to come for Voodoo Doughnut, Orlando.